A few weeks ago I was chatting to an italian co-worker and we were indulging in some altogether very british complaining about the weather.  “Typical England.  Only one day of sun and then always raining.” came the complaint in her very thick italian accent, utter exasperation latent in her tone of voice.  I smiled and nodded in agreement as I tried to think back to the last time it had rained for any sustained period of time.  Internally I was puzzled as to why, despite her perception of british weather, I’ve never seen her without a pair of sunglasses balanced hopefully on her head.  Perhaps it’s some type of charm to plead with the sky and that’s why she wears them on her hair rather than her eyes.  She sells store cards in the shop I work in so perhaps it’s part of the get up to sell more credit cards; by imparting a sense of sunny holidays and the good life.  Wealthy people and big shots wear sunglasses, yes?

Musings on my impression of her appearance aside, my quest for an easy life meant that I chose not to point out to her that our part of the country has had so little rainfall in the past two years that the whole area is in drought and currently under a hosepipe ban, an enforcement which if broken can land you a hefty fine.  That’s more typical England, the fining I mean.  More recently however, we’ve had some April showers.  Alternating blasts of bright sunshine followed by

drenching downpours of rain and/or hail, the sky alternating between pale blue and deep, brooding dark purplish grey.  During one such sunny break yesterday I ventured out into the garden.  As it was sunday the noise of the traffic was barely audible and all I could clearly hear was the dripping of the fallen rain off the plants in the garden. 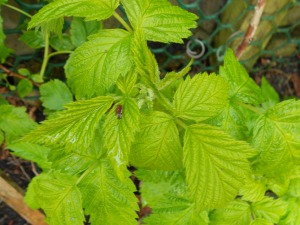 The sky in the east was purple-grey and in the west is was pink and blue.  Everything in the garden seemed so refreshed and vibrant and I couldn’t resist grabbing my camera to capture some of the colours of spring.  I have a row of raspberry canes lining one side of my garden path and the leaves change colour gradually through the seasons but they are never as green as they are during the spring and after rainfall.

Prompted by my recent reading of Carl Sagan’s Cosmos, I pondered, should any extra terrestrial ask us (humanity that is), which colours represent the seasons best, presuming they’re asking those of us who live far away enough from the equator to experience seasons, what would we tell them.  I’m sure if such an event ever occurred a suitably well equipped and academic committee would be formed to provide the answers.  But in the meantime, I make my own personal preparations.  Spring is pale blue, light and vivid green, muddy brown  and purplish-grey.  Have your own suggestions?  Answers on a postcard please (or in the comments, whatever’s easiest for you).  I think I’ll postpone mulling over the colours of other seasons until I experience them as they come this year.  The visible spectrum of light is such a wondrous thing and yet we’re burdened by the knowledge that there is so much our eyes fail to see.  Good ol’ Carl Sagan, making me feel both amazed and annoyed at being human.

In a roundabout way, I’m linking this to one of my current crochet projects which is a so-called ‘Springtime Throw’.  The pattern was reproduced in an issue of Mollie Makes magazine and I have since purchased the original book, Cute and

Easy Crochet by Nicki Trench.  When I first saw the picture of the throw I fell in love with it and despite being strapped for cash most of the time, set about buying a few balls of the expensive yarn to make it.  It’s 432 squares of 30 different colour combinations.  But now after pondering the colours of spring, I can’t really say that the throw is made up of the colours of spring.  Perhaps it’s a spring throw in terms of tog, like a duvet.  Still incredibly beautiful though and I look forward so much to payday so I can buy a few more balls of yarn and finish a few more squares.  I’ve completed about 250 squares and this is what that looks like.

Perhaps it’s a spring throw in the sense of happiness and joy it evokes.  Just how I felt when I was walking to work one day and noticed the quintessentially english willow trees that bow over the river were just beginning to bud after a cold and dry winter.